I am at the Mesh conference in Toronto today and tomorrow. Last night after a pre-Mesh event I had the opportunity to chat with a few friends. One thing we addressed with how the music industry has changed. Jay Moonah, who is both in marketing related business and is a musician (and who is also one of the smartest people I know in social media), said while the music business is alive, the record business is essentially dead. We talked about how Prince was perhaps one of the first to change the model. I recall at his last concert he gave copies of his CD away when we attended his concert. Jay pointed out that this had the additional effect of driving up his CD sales and got him quickly to the top of the charts. Brilliant.

Today's first keynote at Mesh is Ethan Kaplan, head of technology at Warner Bros. Records talking about the music industry. He started the fansite that REM now uses as their official site. Of course as an REM fan I couldn't miss this talk! A summary of some of the discussion between Kaplan and the audience at Mesh--

Nine Inch Nails (NIN) and Radiohead - recently gave their new album music away. This is a very public illustration of something that has been going on for a very long time.

NIN - Trent Reznor is throwing all assumptions out the window since 1999, playing with the medium.

Creating music is creating an artefact. Musicians need to isolate what they are creating, how they want to represent it, how they want to maintain control of it. E.g. is it music, is it digital, is it art. It has become segmented; musicians can still capitalize off it by performing, selling product (music) online, selling related items.

Artists have to follow their own vision, and give their fans what they want to only a limited amount. His advice to many artists is to not read fansites and discussion boards since they will just get frustrated. These fans want to claim a piece of the artist; they are separate worlds and the artist does not need to create a one-to-one relationship. Today a fansite can have more traffic than an artist's site.

The greatest danger for bands is the fake, the astroturfing - it is so obvious to the audience if they try this.

How do you find bands in the social media space to develop them? Kaplan says they have many people who go to live shows--300 hardcore new music fans. With social media the trick is finding the signal amongst all the noise. A band that is a good local band, how do you create this into an emergent scene? 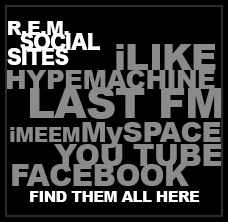 Or, with an established band that lost its fan base (such as REM); how to you get them to build up an audience again? How do you use this same technique being used for younger bands and not look like they are co-opting tools of younger bands? REM not too difficult since they have always been into media.

Their band websites now encompass both the standard band, tour, music information as well as ticket distribution and stream of (monetized) content. Anybody in the company (whoever has the information first) can update the website; the websites update now as easily as MySpace or some of the other social media spaces. Some artists will update their own sites. It is dealt with on an artist-by-artists basis. Some artists who were very "old school" have latched onto it quickly. Their largest MySpace campaign was REM; they did the most with free content on the Warner Bros. label.

The days of IRS have transitioned to artists being "their own IRS". Identity of the label now no longer as important as the identity of the artists. The cult of label personality has come and gone.

Video games such as Rock Band and Guitar Hero - how does this fit into the music business? It introduces a younger audience to older individual song tracks. People playing Metallica's "Enter Sandman" in these games have driven the recent sales for these songs. It makes sense to sell in connection to these games.

When you remove a physical supply chain (the records, CDs) it makes things more difficult, but frees things up to do other things. With Pearl Jam's and Radiohead selling live shows, the emphasis is on quality.

What is the relationship between the live concert now and selling the music? Live music is popular right now, was previously largely untapped as far as selling the music later. Live music is the root of the music experience, and a mistake for labels to forget about this aspect. One of the largest untapped revenue streams. When the band makes its own official good quality recording of the shows, the value of the illegal bootlegs that are poorer quality drops to nil.

They are hoping that Twitter will have location awareness for the REM tour--Twitter has promised them this to be launched next week. He saw a band at SxSW and everyone was twittering about it from the front row. Something interesting could happen with that.

Warner Bros. Records is the largest label with its own in-house technology department. They didn't want to outsource this aspect.

Is there any reason to pay for music again? You pay for it just by choosing to listen to it online or on the radio; you may just not purchase the artefact itself again. The traditional notion of paying for an MP3 or CD will change to a model where you are paying for streaming of music, whether it is Pandora or Sirius satellite radio.

Could MySpace become a label? There is no filtering - a record label does a lot of filtering of the bands and music.
Posted by Connie Crosby at Wednesday, May 21, 2008

Email ThisBlogThis!Share to TwitterShare to FacebookShare to Pinterest
Labels: mesh08