David Weinberger on the Nature of Knowledge: A Viewing Guide

The following keynote by David Weinberger was presented at KMWorld 2012 conference held November 2012 in Washington, DC.

Thanks to the folks at Information Today for sharing this video (and the other videos) so that we all have the opportunity to benefit from them.

David Weinberger is a fellow and senior researcher at Harvard's Berkman Center for Internet & Society. He is also Co-Director of the Harvard Library Innovation Lab. In and of itself, this is pretty awesome in my estimation.

I first came to know him as one of the authors of The Cluetrain Manifesto which pre-dated the social web. When I first read this I didn't know he had a law and library connection. Since then he has authored some prominent publications as well as numerous articles in popular publications such as The New York Times, Harvard Business Review, USA Today, The Guardian and Wired.

In the video above, Weinberger starts by discussing the class Knowledge Pyramid, known by various names such as the DIKW Hierarchy (for data, information, knowledge, wisdom), the Wisdom Pyramid and others.

I couldn't find an uncopyrighted image that I liked, so I created one (below). Feel free to steal this: 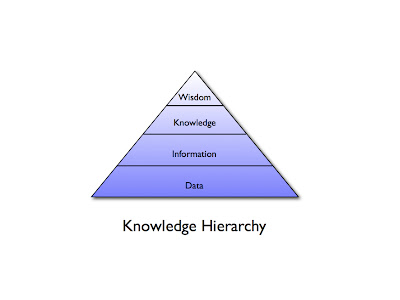 Here are some questions to guide your viewing. Answer these based on the thinking David Weinberger  discusses in his keynote talk (the video above):

Posted by Connie Crosby at Saturday, January 12, 2013 No comments:

A New Year, a New Attitude

Hi folks! I hope 2013 is treating you well so far. It has already been quite interesting for me.

I should mention that 2012 was a bit slow on the consulting side, so I jumped head first into teaching. I became parttime professor at Durham College in their new Legal Research and Information Management program. The first cohort are fantastic, the folks at Durham have been fantastic, and the learning curve has been steep! But, I made it through the first semester teaching the communication course.

This semester I am teaching the knowledge management and social media course, almost completely online. This course is also an option for DC's Mediation - Alternative Dispute Resolution program. Most of the content will be in a private space, but I may from time to time share some of what I am posting publicly in case you are interested. We are still settling into our platforms, but at some point I hope to share what I decided to use and how it works.

The next post is a "viewing guide" for a very interesting lecture by David Weinberger. I decided to share this because I was planning on posting the video here anyway, and thought others might find the guilde helpful. I'd love your feedback.