A little music video for you by Reina del Cid. Susan found this and posted it to Facebook, but I enjoyed it too much not to share here as well. This reminds me of my days as a page when I was in high school and as a circulation assistant when I was in university. :)

I don't usually talk about sales on this blog, but I happened to notice a few book sales you may find of  interest--check these out: 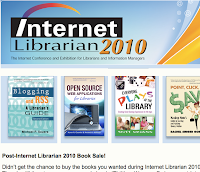 Information Today - library, information management and knowledge management titles
Michael Sauers has posted about the Information Today sale on books from Internet Librarian 2010 conference being extended to January 31, 2011: 40% off the retail price on all books. That is great news!

I am reading The Accidental Taxonomist by Heather Hedden which I picked up from InfoToday at KM World. For anyone into taxonomy, I highly recommend it!!

I  also purchased the new edition of Building & Running a Successful Research Business by Mary Ellen Bates which has been having great word-of-mouth reviews from colleagues, and Open Source Web Applications for Libraries by Haren Coombs & Amanda Hollister (shown in the image above). Lots of holiday reading in my future.

Looks like I need the new edition of  Michael's book Blogging and RSS: A Librarian's Guide to add to my collection, too! 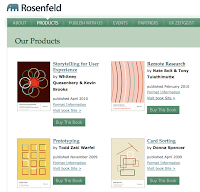 Rosenfeld Media - user experience design titles
Rosenfeld Media, the maker of fine books on user experience design (also affectionately known as UX)  currently has a 40% off sale on their books, epubs and webinars until January 1st. I have several of their titles on my shelf for reference. They are gorgeous books, beautifully designed and bound, with practical, well-written content. I try to pick up the latest ones every time I see they have a sale. 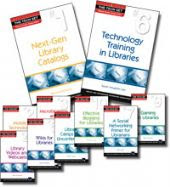 Neal-Schuman Publishers - The Tech Set series for libraries
I noticed the series my book Effective Blogging for Libraries is part of,  The Tech Set series, is currently on sale 30% off from Neal-Schuman if you purchase the whole 10 book set (there is an ad on the front of the website). The deadline isn't indicated, so you might want to check with them directly.

In Canada this series is distributed by OLA Store. I checked with them, and they will extend this sale to Canadians until the end of the year as well. Contact Ryan Patrick of the OLA Store directly at rpatrick@accessola.com for the sale price. (Thanks, Ryan!).

What about you--have you seen any good book sales? What work-related titles are you looking forward to reading?
Posted by Connie Crosby at Wednesday, December 15, 2010 No comments:

Following my friends in the social media PR world on Twitter and at in-person events, I often hear the talk about identifying influencers and reaching out to them. But who exactly are influencers and how can you identify who they are?

In Malcolm Gladwell's The Tipping Point, he examines this to some extent: the people with wide networks who can help spread the word on something he calls Connectors.

Stephen Abram has posted a great movie from R+I Creative about influencers (which I have re-posted below), and along with it has posed some questions for library folk:

Libraries are a very misunderstood ‘brand’. In some respects we are that “book, books and nothing but books” image and positioning. How do we make the library brand broader in our users’ consciousness?

Do we understand the influencers in libraryland?

Who among our users are influencers?

It's not very often I see people in libraries reaching out to influencers specifically, apart from perhaps well-planned marketing campaigns to raise funding for something. What about day-to-day, do we know who are influencing our library users? Who are setting the trends, who are identifying the trends? Do we try to connect with them, learn from them, and perhaps even influence them?

In libraryland I certainly see Stephen himself in this role, but there are plenty of others. The trick is to look beyond our immediate roles, our immediate world, look to other groups, other communities, other industries, to see what is happening. So often ideas are pollinated from one area to another, you can literally see an idea spreading, morphing, becoming adopted over time. That is how futurists are many times able to make predictions, they look to see what already exists somewhere else and thinks about how that will have an impact down the road.

Anyway, regardless of whether you are in the library world or not, this video is very interesting, entertaining and informative:

This movie is a keeper--great catch, Stephen!

So, who influences you? How do they influence you--are they people you have contact with on a daily basis, are they people in your family, in your workplace, in your industry, or in the media?
Posted by Connie Crosby at Tuesday, December 14, 2010 2 comments:

A Day in the Life of a Digital Nomad

Last week I had the privilege of kicking off Toronto Public Library's conference day for its Information Services Team staff. I wanted to talk about the new collaboration tools as well as providing an overview of social media tools, but putting it into a meaningful context.

I got the idea of talking about my collaborative work, tools and computer gear that I use in my consulting when I was reading Mitch Joel's 2009 book Six Pixels of Separation. Mitch talks about the concept of "digital nomads" who are mobile enough to work from anywhere. I don't believe Mitch originated the concept, but the way he expressed it (see some of the first slides for the quote) made the idea click.


A day in the life of a digital nomad
View more presentations from Connie Crosby.
I had a lot of fun putting this presentation together, and hope TPL's staff found something useful in my discussion and the Q&A. I welcome more comments here or via email conniecrosby@gmail.com.
Posted by Connie Crosby at Monday, December 06, 2010 2 comments:

I had the privilege of presenting a new workshop at KM World 2010 in Washington, DC last month. The workshop was an introductory survey on social media inside the enterprise. I promised the participants I would share my slides (below). Unfortunately what you don't see in the slides is all the fantastic participation by those who took the workshop. What a fantastic group! I invited people to share their experiences to help inform others attending the workshop, and everyone was very forthcoming. I thank everyone who took the workshop, and encourage you to stay in touch either in the comments here or by email to me conniecrosby@gmail.com and let me know how your projects go.   Social Media Inside the Enterprise