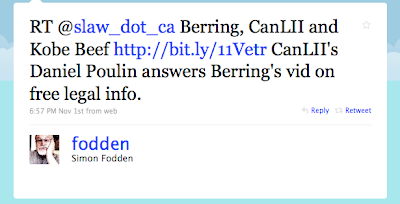 Do you have pointers or questions about the new retweeting feature?
Posted by Connie Crosby at Saturday, November 21, 2009

Hi my name is Kevin Waterman from the Garden State. Enjoyed reading your article on "New Beta Twitter Feature: Retweeting" Lots of good information. I am a newbie and look to learn everything I can about this medium. Thank you again for sharing and much success to you. Sincerely, Kevin

I'm glad you found it helpful. Thank you for stopping by!

Nope. Don't like. Uh-uh. (the RT function, not meaning your post!)
The compelling and beautiful feature of twitter is that it first-and-foremost is a human-to-human connection. That gets damaged when a stranger turns up at the dinner table, so to speak. Granted, the shared connection is there, in a muted way, but still, the general "feel" shifts to Information Stream away from an information-and-thoughts-*From-People-I-Care-To-Listen-To* stream. Perhaps a subtle, but to me absolutely crucial, distinction.

Thank you for pointing this out. So, in addition to being confusing, it changes the nature of retweeting.

Charon QC also pointed out the new features makes it too easy to retweet without thinking.

I was wondering whether we were all having misgivings just because it is a change from what we are used to, but it sounds like many people don't like how this feature works. I did notice most people continuing to using the "home grown" way to retweet.

Professional Business Plan said...
This comment has been removed by a blog administrator.
11:51 pm