Connie Crosby's Day Off, or How Twitter Decided We Needed a Break

Funny things happen when I go off-line for any length of time. In the case of this weekend, I signed off mid-afternoon Friday to head for a workout and then meet a family member who was arriving in town to visit for the long weekend. While out I tried to send a message to my Twitter followers via my cell phone, but it didn't work as expected so I sent the "tweet" a second time. I had no idea anything had actually gone wrong until I logged back in the next morning.

It turns out my account had been deactivated sometime after I left the house Friday afternoon. Apparently about eight legitimate accounts were accidentally deactivated in Twitter's attempt to clean out spammy accounts, and mine was one of them. Ironically, I had been actively taking part in the discussion on the Twitter blog regarding their spam-fighting efforts, and we had warned them to take care in how they went about these efforts.

The first I noticed the trouble was in reading an email from Steve Matthews saying to let him know if I needed any help getting my account reinstated. I also had a message from Eden Spodek asking what happened. Uh oh. I had a look at my account, and all messages but my very last tweet were gone. All my 1500+ followers, too. The followers especially represented hours and hours of searching and selection over 18 months.

Looking more closely, I discovered several conversations in the blogosphere and on Twitter asking what had happened to me, and people contacting Twitter on my behalf. Blog posts were written. Private messages were sent to Twitter pleading to reinstate me. Meanwhile, I had been completely oblivious. 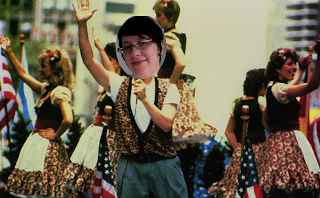 It was all so Ferris Bueller! In the movie, while Ferris has a fun day skipping school, all the kids in his school think he is home on his death bed. The kids start rallying and raising funds on his behalf. He has a great day and is completely oblivious to their efforts.

I was so amazed at what everyone had done for me--there is so much love and support from my friends on Twitter! Friendships I have developed both on and off Twitter which have been reinforced there are very real. Never was this so apparent to me as this weekend. These people really have my back when I'm not looking!

Here is just part of the discussion out there:

From LawyerKM:
You Can Never Be Too Popular - except on Twitter (Aug. 2/08)

There are also discussions floating around on Twitter, FriendFeed and Plurk. And of course you can't see all of the wonderful personal messages that have been sent to me in support. Wow!

I was fairly philosophical about the whole thing. This is the video comment I posted to Dave Delaney's blog last night:

Some things I have learned over my 20+ years online:
On the point of making contingency plans, Dave Delaney discusses it in his response to my video:

The good news is Crystal at Twitter has been in direct contact with me also and Jason has been trouble-shooting in the help forum. Apparently they have been working all day to get my account @conniecrosby back on its feet. It is partially there. In the meantime, I have started collecting some of my followers and tweeting from my business account @crosbygroup. Feel free to follow me at either. I am also active on FriendFeed as conniecrosby, and have had the identi.ca account conniecrosby for a while although have not explored that yet. In Facebook I am (slightly) more private, not following quite as many people.

I can't tell you how much all the out-pouring of concern has meant to me! I appreciate all those who looked out for me, and hope to be back in full force soon.
Posted by Connie Crosby at Monday, August 04, 2008

Hi Connie,
Good to have you back. :) The difficulty with this type of situation is that some of us are not connecting with the same people across all the different sites/tools that are out there (i.e. I used FB and LinkedIn differently than Twitter) so when Twitter goes down or deletes you, there is no real backup for finding many of those people again.

Wouldn't it be great if someone developed an Export tool for Twitter so you could export and save your Followers/Followees?

Definitely! Dave discussed the same thing in his little video clip above. He points out that LinkedIn lets us export our contacts (have you backed up yours lately?) and that Twitter will need to make this feature available to move forward. I tend to agree with him--it should be something that those who develop these networking tools think about.

Connie, I'm glad twitter was able to resolve the situation within 48 hours or so. It was very strange not being able to find your account on Friday.

I agree nothing is permanent online especially not with all the free apps we use these days. Hence, the skepticism from many IT professionals.

Remember it's the people and relationships that matter not the tools.

You are very right, Eden (Bargainista). You sum up my feelings very well!

My favourite part of this whole blog post is the photo, and it is missing. Blogger is having a real problem with loading images tonight. Here it is on Flickr for now, for your amusement.

Hey, Connie. I'm following you now on Identica, and I hope you take some time to dual-post there. It sounds like quite an ordeal you've had.

We're working on ways to backup your social network from Twitter to Identica to avoid having this kind of problem in the future.

Hi Connie,
I too was away from twitter this weekend, so I had no idea! Great story :)