Q: What do you think Club Penguin is teaching our kids?

A:
Q: Is it possible to build a truly safe environment for kids to play in? 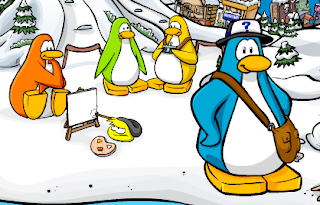 A: There are limitations; there is a lot of talk and marketing behind safety. As a technologist he could see the holes in the system. The live moderators are key to supplementing the technology to keeping things safe; human interaction compensates for limitations of technology. Things like identity and numbers are blocked so that identity of the children can not be seen, and then moderators watch also.

Safety is a strong point of Club Penguin; they did not have marketing dollars to advertise it, so they focused on just doing it.

Q: Kids are looking for trends, but you need the parents ultimately to pay for kids' access to Club Penguin. How do you make it work?

A: Knowing that there are 6 and 7 year olds playing the games, they have to have elements for them. They also have 13, 14 & 15 year olds (and older) who find it goofy, wacky, funny (a la Napoleon Dynamite). It is really aimed at 8-11 year olds.

Q: How do you go from not being known to 12 million users?

A: There was a lot of passion, and they approached it as parents. They were taking a big risk, doing something new, so they didn't want a lot of people looking over what they were doing so didn't seek out VCs at the beginning.

They have marketing mindsets, but are interviewing for their first marketing person next week. They just wanted to make it as fun and safe as they possibly could, and felt the rest would take care of itself.

Q: Very few have managed to do what you have done. Are there some key things that helped you along?

A: From distribution standpoint, company they paired with let them sink or swim, didn't interfere. There wasn't a single point in the process where they lost focus or forgot who they were. Their mantra is "If it doesn't matter to an 8 year old, then it doesn't matter." So, they don't go to a lot of conferences. The kids care if there is good content, if the parties are fun. As a parent, it became easier to focus on this when they saw their kids online.

Their focus was on doing things better and faster than competitors who had more money for marketing.

Audience Q: Have you thought about creating a Club Penguin for teens to leverage that interest?

A: Expectations would be high. They try not to focus on the demographics. There are a ton of people flooding the market. And there is more of a focus on safety, which there wasn't before they started.

Audience Q: What would you do if Disney (owner of Club Penguin) asked you to put Mickey or Buzz Lightyear into Club Penguin?

A: He asked that question when they were selling to Disney. They were told they could add the characters in if they felt it fit with the story of Club Penguin, but did not have to. So far it hasn't fit the story.

Even Disney is trying to be careful not to flood the market with their brands.

Audience Q: Every start-up has the concern about how to get the word out. There weren't that many channels online when you started. How did you get word out?

A: It was purely viral. He can't take credit for it. They didn't even try to orchestrate a viral campaign. They hoped the kids would talk about how fun it is, and parents would talk about how safe it is. The kids talking to each other in the schoolyard was where most of the advertising took place. They listened to what 8 year olds really wanted and gave it to them.

Build a great product and build it as fast as you can.

Q: How do you make stuff that brings people back? What is hot today is not hot tomorrow.

A: Anything they create cannot be identical to what they do previously. They launch new content weekly; they felt this is what they needed to do to keep the kids entertained.

They built it themselves (with off the shelf software); they built the platform - they used an artist who is also a programmer. The art and creative has to be king. They focus on the creative and the environment in the office. There is no turn-over in staff.

Except for activation and lost password emails, they personally write emails. Some moderators send out 1,000-5,000 emails a day. They spend a lot of time making sure that everyone feels listened to.

They see themselves more as facilitators than creators.

When they looked for a buyer, looked for someone with the infrastructure they could use. They were also looking for someone with the same goals. 4-6 months meeting with a handful of companies. Disney negotiations took 2-3 weeks; most of it was talks on quality and philosophy. They answered every question honestly and openly. Post-acquisition nothing has changed from what they thought they were going into.

Q: How often do you get "creeps" on the site?

A: Not often. Internal measuring tool for online spaces is reportable incidents. In their history with serving millions of kids, they have yet to have a single reportable incident. That was their goal from day one. They have been invited to speak for FBI. It comes down to filtering and technologies. There is a lot more technology "under the hood" than most people are aware of. They test and have police agencies test all the time.

Q: How did you figure out the technology for safety as you went along?

A: A lot of that was created before they created Club Penguin. They put a lot of research and technology into it; they were working on it since 1995. It took a lot of time long before the launch.

Q: Buying your child a new igloo seemed like a strange thing to do. With Disney in the loop, are you looking to change the model of how children acquire things?

A: When they dove into the subscription model they had a lot of flack; they were urged to let advertisers foot the bill. One of the key elements that led to a subscription model was his son being on a site and accidentally got into a shopping cart by clicking on an ad. He didn't want his young children to confuse ads with games; it just felt wrong. They have always been ad free; want to continue being ad-free. That is important to them.

Disney has so much infrastructure and other ways to make it easier to parents and kids, so they are looking at other models.

Q: Free versus paid model (12 million subscribers; 700,000 are at the paid level). Does Disney put any pressure on putting free subscribers to paid?

A: All the games, parties, events and chat/social interaction elements are free even though those are the most expensive for the company. They wanted the core of a fun, safe environment to be free. For kids to decorate their igloos, and go to the next level - paid level.

He expected Disney to pressure them or at least inquire about paid levels (presumably they haven't). Thankfully it has continued to grow but their focus is not on converting people to the paid level. They work to create things that are worth paying for. They want to create and be amazing as it can be, especially since most things out on the web are free.

Q: Toronto Public Library reading program has an online component. Have you ever considered incorporating Club Penguin into other streams, including off-line, of learning?

A: His mother and wife are life-long teachers; have spent a lot of time on the educational aspect. They don't want anything like this to be seen as an advertising perspective. Working with Disney, they are obviously looking at publishing. They want to find ways of adding educational component, challenging the kids rather than simplifying things. Club Penguin has a lot of tools for teaching critical thinking.
Posted by Connie Crosby at Thursday, May 22, 2008

Email ThisBlogThis!Share to TwitterShare to FacebookShare to Pinterest
Labels: mesh08

I Love Club Penguin!
I Have been playing it Since march 2006!

Wow--that is a long time! Thank you for stopping by and letting us know.

I've read some articles on how "Club penguin isn't safe anymore" and "Club penguin lied", but I am here to tell you all that Club penguin will look out for every little penguin and make sure it is entertainable for everyone.