It's that time of year when we kick back and appreciate how lucky we are to be in Canada.

Not quite two weeks ago I was in Kingston, Ontario with friends attending Podcasters Across Borders, an annual conference for (you guessed it) podcasters. Each year we come from Toronto, Montreal, Ottawa, and further afield in Canada, U.S. and even Brazil to converge, catch up and learn. We always expect to be inspired, but on the Friday evening before things had even really had a chance to start, we were caught off guard by a very moving, emotional keynote address. 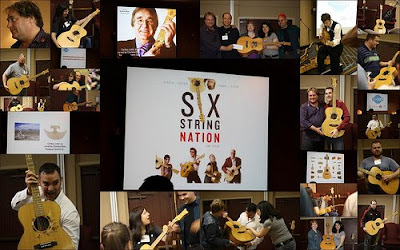 Jowi Taylor of the Six String Nation project spoke to us about the creation of a very special guitar, the Voyageur. It is made from 63 artefacts of Canadian culture and history, including Pierre Trudeau's canoe paddle, Paul Henderson's hockey stick, Maurice "Rocket" Richard's first Stanley Cup ring, L.M. Montgomery's house in Cavendish, and copper from the Library of Parliament among many, many others. The guitar has been in the hands of many people including me and my friends, if you look closely at these photos by Alexa Clark above, and has been played by many famous Canadians since 2006 including Stephen Fearing, Colin James, Hawksley Workman, Feist and many others. If you watched today's Canada Day festivities on CBC, you would have hopefully seen Shane Yellowbird playing it (see photo below):

People have been learning about the Six String Nation project through word of mouth. During his talk we learned that Jowi Taylor has financed the project himself without sponsorship, which has been a fantastic labour of love that has unfortunately left him in debt. Many of us were moved by the collaborative, patriotic spirit of the project and made personal contributions.

A book has now been released to talk about the story of the guitar. It also includes stories of the pieces incorporated into the guitar, and portraits of people with the guitar. This project is bringing together and helping to define our nation in many ways. I encourage you to watch the intro video below, explore the other videos on YouTube telling the moving stories of how the pieces were gathered, and check out the website. If you are lucky to have the Voyageur visit your community, I encourage you to see it live and perhaps even try it out. It is going to be at Harbourfront in Toronto, for example, July 24-26, 2009. The schedule calendar is on the front of the website.

Photo credits (from top to bottom):

thanks SO much for this post, Connie - it's coming to Yellowknife in 10 days for Folk on the Rocks (24/7 concert on a lake!) but I hadn't fully understood what it's all about til I read your post and watched the vid. I'm so excited it's coming up here! (I wanted to say "stoked" that it's coming up, but does anyone still say that these days?)

Fantastic, Nancy! I had watched the video beforehand, but until I heard Jowi speak I really didn't get it. He has done something beautiful and poetic to help us learn who we are as a people and bring us together.

Great post, Connie. Thanks for helping me relive PAB. And the video is excellent, I'm going to FB it.

Thank you, Heidi. It was a great weekend, and I am so happy to have met you as well!

Many thanks for so wonderful story and video. I would buy that quitar for myself but I fell just only the professional player could handle it. Very nice!
Cheers,
Oleg